Wind and Solar Use Up, Fossil Fuel Use Declining 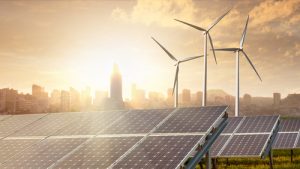 Wind and solar have grown seemingly unstoppable. While two years of crashing prices for oil, natural gas, and coal triggered dramatic downsizing in those industries, renewables have been thriving. Clean energy investment broke new records in 2015 and is now seeing twice as much global funding as fossil fuels. One reason is that renewable energy is becoming ever cheaper to produce. Recent solar and wind auctions in Mexico and Morocco ended with winning bids from companies that promised to produce electricity at the cheapest rate, from any source, anywhere in the world, said Michael Liebreich, chairman of the advisory board for Bloomberg New Energy Finance (BNEF). “We’re in a low-cost-of-oil environment for the foreseeable future,” Liebreich said during his keynote address at the BNEF Summit in New York on Tuesday. “Did that stop renewable energy investment? Not at all.”

Renewables are beating fossil fuels 2 to 1

Government subsidies have helped wind and solar get a foothold in global power markets, but economies of scale are the true driver of falling prices: The cost of solar power has fallen to 1/150th of its level in the 1970s while the total amount of installed solar has soared 115,000-fold.

The reason solar-power generation will increasingly dominate: It’s a technology, not a fuel. As such, efficiency increases and prices fall as time goes on. What’s more, the price of batteries to store solar power when the sun isn’t shining is falling in a similarly stunning arc.

Just since 2000, the amount of global electricity produced by solar power has doubled seven times over. Even wind power, which was already established, doubled four times over the same period. For the first time, the two forms of renewable energy are beginning to compete head-to-head on price and annual investment.

This article was originally posted on Bloomberg.com.