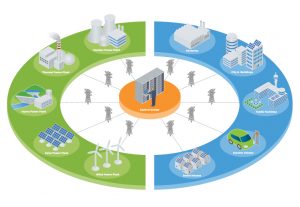 A major player in U.S. renewable energy happens to be a five-sided building in Virginia usually associated with deployment of power rather than consumption of it.

The U.S. Department of Defense is the second-largest buyer of renewable electricity through deals meant to lock in long-term supply and provide incentives to developers of wind and solar projects, according to a database of more than 600 corporate power-purchase agreements (PPA) tracked by Bloomberg New Energy Finance. Only Google is a bigger buyer. The revelation provides one of the starkest examples yet of the same clean energy imperatives driving companies, cities, universities, and other federal agencies.

First, renewable power has become cheap enough to compete with conventional sources in many places, particularly the Great Plains, where wind farms dot the landscape from Texas to Minnesota. Companies looking for power are commissioning the deals—traditionally with utilities—as a long-term hedge against variable electricity prices. At the Pentagon, the military has committed to acquiring up to 3 gigawatts of renewable capacity before 2025. The Air Force and the Navy lead the armed services in commissioning clean energy projects.

Retired Navy Vice Admiral Dennis McGinn, now an assistant secretary for energy, installations, and environment, said economic security is “inextricably” linked with energy and the environment. “You can’t consider one without considering effects on the other.”

Second, and even more surprising, is that in locations where renewable energy is competitive but not necessarily cheapest, energy consumers are still pursuing carbon-free power. This is often driven by corporate sustainability or climate pollution goals. There’s a calculus at work for each entity, between changing prices and changing institutional missions.

The Pentagon is finding that clean power is often just better, without even considering the climate benefits. It helps the military execute its mission in big and small ways, like something as simple as lightening the load soldiers carry onto the battlefield. Not surprisingly, Congress, the White House, and the Joint Chiefs of Staff have all encouraged the military to clean up its energy sourcing.

This article was originally posted on Bloomberg.com.