The Most Efficient Solar Cells Have Just Been Created 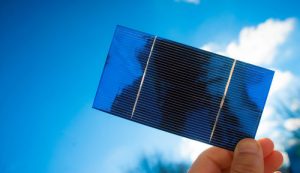 These engineers set a new world record in the energy saving industry.

The previous record of 24 percent was held by a large, 800-square centimetre solar cell produced by a US company, but these new photovoltaic cells aren’t only more efficient, they also cover far less surface area, which means they’re going to make solar power even cheaper.

“This encouraging result shows that there are still advances to come in photovoltaics research to make solar cells even more efficient,” said one of the researchers, Mark Keevers, from the University of New South Wales (UNSW) in Sydney. “Extracting more energy from every beam of sunlight is critical to reducing the cost of electricity generated by solar cells as it lowers the investment needed, and delivering payback faster.”

This UNSW team is the same one that set a new solar conversion record back in 2014, by using mirrors to concentrate sunlight and achieve 40 percent efficiency. But this new record is even more impressive, because it didn’t involve any concentration, and it was something engineers hadn’t expected to achieve for several decades.

“A recent study by Germany’s Agora Energiewende think tank set an aggressive target of 35 percent efficiency by 2050 for a module that uses un-concentrated sunlight, such as the standard ones on family homes,” said one of the researchers, Martin Green. “So things are moving faster in solar cell efficiency than many experts expected.”

The new cell is only 28 square centimetres (11 square inches) and it works by splitting the incoming sunlight into four bands.

The infrared band of that light is reflected back towards a silicon solar cell, and the other three bands are directed into a three-layer, new type of solar cell, made of: indium-gallium-phosphide; indium-gallium-arsenide; and germanium.

The sunlight passes through each of these layers, or junctions, and energy is extracted by each at its most efficient wavelength. Any unused light passes on to the next layer, and so on, to squeeze the most out of every single beam.