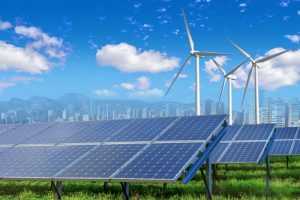 Wind and solar photovoltaic had record additions for the second consecutive year, with renewable energy capacity now beating out the use of fossil fuels.

Renewable energy accounted for nearly 25 percent of global electrical capacity in 2015, according to a new study, Renewables 2016 Global Status Report, by REN21.

The power sector experienced its largest annual increase in capacity ever, with significant growth in all regions. Wind and solar photovoltaic (PV) had record additions for the second consecutive year, accounting for about 77 percent of new installations, and hydropower represented most of the remainder. The world now adds more renewable power capacity annually than it adds (net) capacity from all fossil fuels combined. By the end of 2015, renewable capacity in place was enough to supply an estimated 23.7 percent of global electricity, with hydropower providing about 16.6 percent.

Modern renewable energy supplies approximately 8 percent of final energy for heating and cooling services worldwide in buildings and industry, the vast majority of which is provided by biomass, with smaller contributions from solar thermal and geothermal energy.

Global investment also climbed to a new record level, in spite of the plunge in fossil fuel prices, the strength of the U.S. dollar (which reduced the dollar value of non-dollar investments), the continued weakness of the European economy, and further declines in per unit costs of wind and solar PV. For the sixth consecutive year, renewables outpaced fossil fuels for net investment in power capacity additions.

This article was originally posted on ACHRNews.com.