THE NEXT BIG IDEAS:

Colorado’s pioneer spirit is alive and well among many metro Denver companies, and the Denver Business Journal invited them all to expand on their latest innovations—whether it was a new product, a better business process, a creative revenue stream, or unique software application. The sky was the limit. Quantum Renewable Energy was one of eight companies included as an intriguing “Next Big Idea.” 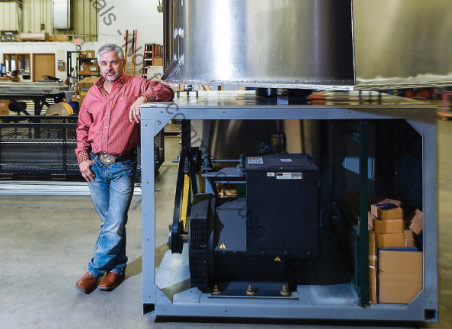 “We took a conventional wind turbine, examined how it worked, looked at inefficiencies, made some dramatic improvements on the location of the alternator and how it functions, and brought it into the urban corridor,” said John Palizzi, Quantum president and CEO. “We moved the alternator from the top to the bottom and got rid of the pole.”

Palizzi, who’s a licensed general contractor, got out of the construction market in 2004 and went into alternative energy the same year with the founding of Quantum. He had been interested in alternative energy since filling out the solar energy part of his general contractor’s licensing test back in the early 1990s. Quantum did research and development on its technology until 2009.

Quantum, which has been funded mostly by Palizzi, did $750,000 in revenue last year, and anticipates 2016 revenue of about $3 million, according to the company.

Quantum’s core product is its American-made Warrior100 vertical wind turbine that produces utility-grade AC electricity within city limits. The turbine is part of an integrated system that also includes solar panels and a small natural gas-burning turbine. It even can think for itself, through a “brain” called Smart Box, to anticipate power loads and environmental conditions for the production of renewable energy. The box has a cloud-based monitoring and reporting system. 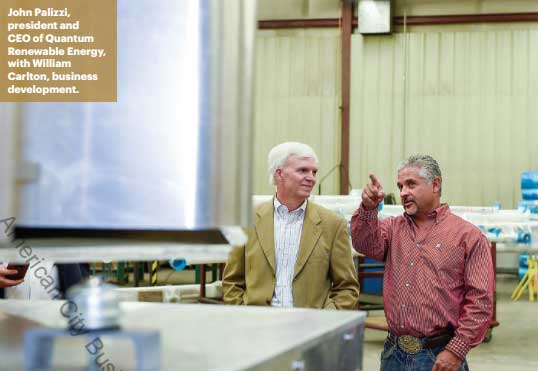 The Quantum system was designed to “shave the peak,” or reduce the level of a customer’s peak power demand. The company estimates customers can save as much as 40 percent on their energy bills, “which translates to significant savings,” according to Quantum.

“We’re trying to educate people about wind power and getting financing to do it,” Palizzi said.

The Denver Metro Chamber of Commerce installed a Quantum system in 2013 to cut its utility bills, and a few years later said it had seen a 25 percent drop. Tom Clark, chamber executive vice present, told the Denver Business Journal in 2015 that “you have to walk the talk” regarding renewable energy.

Palizzi was one of nearly 50 U.S. business leaders invited to the White House earlier this year to brief senior Obama Administration officials on how climate change affects businesses. The discussion, which coincided with the United Nations’ recent climate change agreement, focused on ways to curb the damaging effects of increasingly severe weather as well as efforts to make the U.S. the world leader in bringing clean energy products to market.

Renewable Energy is the Future While Fossil Fuels are Becoming a Thing of the Past
July 15, 2016
Go to Top