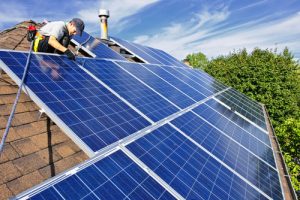 Unlike the fossil fuels that still provide the bulk of the U.S. power supply, solar panels generate electricity with no air or carbon pollution, no ash or other waste products, and no inputs other than sunlight.

While the manufacturing of solar panels, like all other energy devices, involves emissions, PV electricity generation itself:

What’s more, rooftop PV electricity generation involves little to no water. That stands in contrast to almost all power plants that make electricity using steam. These include coal and nuclear plants, many natural gas plants, and some other renewable energy facilities, which depend on water for cooling. That dependence can cause problems when cooling water becomes too scarce or too hot. PV systems, in contrast, require no water to make electricity.

In most cases, solar panels also have no impact on wildlife because they are typically installed in already built environments. Solar panels do involve materials that need careful handling while the panels are manufactured and at the end of their useful lives. As with computer chips, manufacturing solar panels involves a range of hazardous materials—for example, hydrochloric acid, sulfuric acid, nitric acid, and hydrogen fluoride. Non-silicon solar cells, including ones made from gallium arsenide, copper-indium-gallium-diselenide, and cadmium telluride, contain more toxic materials than those used in traditional silicon cells.

This article was originally posted on http://www.ucsusa.org/